Rushing into the swirling vortex of civil war in Spain – a chance to hone their instruments of war – were forces from Germany, Italy and Soviet Union. Most conspicuous on the winning side, however, would be Nazi Germany’s Condor Legion.

While the Japanese defending Tarawa had their own problems, the U.S. Marines landing at Betio had to overcome erratic tides, inadequate landing craft, poor communications … and the stiff Japanese resistance.

26 Ordeal of Liberation at Colditz By Eric Narveson

For the escape-prone POWs at Colditz Castle, the long moment of possible liberation posed dangerous uncertainties. The German SS was determined to make a last-ditch stand in the shadow of the castle walls.

Mingling with Germans and Italians in Rome on the eve of the Salerno invasion, an American general and colonel were charged with determining if an airborne assault on the Eternal City would be feasible. 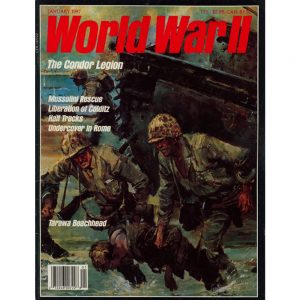