42 Throw of the Iron Dice by Bruce R. Pirnie

As German and Russian tanks rolled into opposite ends of the corridor, collision was inevitable. To both sides, the clash over the Kursk salient itself had seemed somewhat inevitable, too. Still, Hitler took the gamble.

16 Success While Others Fail By Michael J. King

Already on the ropes, the Germans surely would collapse before the thrust planned by Montgomery. The American airborne played its role; the British and Poles theirs, but the Germans had something to say, too.

With France gone, survival itself was the stark issue facing Britain. What, then, if there had been no Winston Churchill? No German decision to strike at cities?

To carry out the U.S. Navy’s first coordinated carrier strike of the war, 104 planes must negotiate a fog-shrouded mountain pass in New Guinea to reach the Japanese flotilla on the far side of the island. 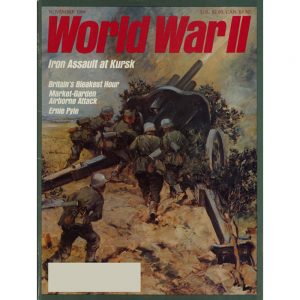