Catherine the Great: A Biography Hardcover 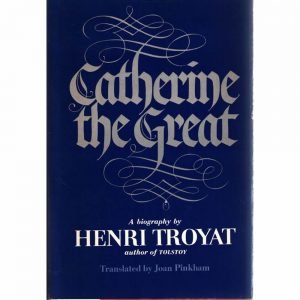 Henri Troyat writes well of a woman who had a natural appetite for absolutism. She subjugated the serfs, jailed dissidents, lost her head over younger lovers who were hired to service her lust, encouraged obscene consumption in imitation of Versailles although she detested the French, deplored the ineluctable rise of republicanism and the concept of human rights, stole her son’s children, frustrated native Russian talents in preference to ill-fitting Continental transplants, neglected her country’s infrastructure (except possibly for establishing some institutions of learning), and generally ruled in such a way that her death began the undoing of all she had worked for for 34 years; that is to say, she did little to strengthen its non-parasitic systems or institutions, she merely enforced her will.

I’m not entirely sure after reading this what made her “Great,” unless it was her military conquests, which are given rather hasty treatment by Troyat. Maybe other hereditary monarchs were as bad as Peter III and she merely shone by comparison. Maybe all an hereditary monarch had to do in those days to be considered great was not let the country go to hell in a handbasket.

Be the first to review “Catherine the Great: A Biography Hardcover” Cancel reply